Photo Booths And Their Rising Popularity In Lexington

Across the globe is a rising, and somewhat surprising, phenomenon: the photo booth in Lexington. Why surprising?

Well, with the popularity of smartphones and apps that can filter and edit your shots like Snapchat and Instagram, it’s a bit strange that photo booths are having some sort of re-birth.

It’s almost one hundred years since the first photo booth came about. The first one was installed on Broadway in New York in 1925 by a Russian man named Anatol Josepho.

Within the first six months, over 280,000 people used it! Just two years later, its owner, Anatol Josepho, sold the Photomaton as it was named, for one million dollars. He still continued to earn royalties too!

It seems to be that photo booth popularity is on the rise again. In fact, more people search “photo booth near me” than “wedding DJ near me” when organizing their big day.

And it’s not just weddings that are using photo booths either. Many corporations are hiring them as an ice breaker for colleagues to have fun at work events, schools are using them in their proms, and people are hiring them for birthday parties.

They are. Nothing says “party” more than a filtered selfie these days! But, you get so much more with a photo booth. They’re exciting and every age of guest loves them. As well as the photos, people go home with the memories of taking them too.

More than a digital image

The idea of a photo booth is obviously to take photos. However, with a photo booth, you get to have so much fun while you’re taking them. Because of their customizability, you can often get a whole group of people in the shot.

And let’s not forget the props! Oh, the fun to be had with a feather boa and oversized glasses!

In my opinion, one of the best things about hiring a photo booth is that you can get printed pictures too. Photos have become very much a digital thing these days, with very few actually making it into a frame or printed photo album.

Not just a classical photo booth

Gone are the days of sitting on an adjustable swivel stool! Photo booths nowadays are so much more! You can have interactive mirror booths, inflatable LED booths, open-air booths, fashion runway booths, as well as box booths.

Modern photo booths also do a lot more than take pictures. You can make GIFs, HD video messages, share photos on social media, color effects on prints like sepia or black and white.

The organizer can also have access to all of the photos on a DVD and a web gallery.

Hiring a photo booth in Lexington

Has this article given you ideas for your next big bash? Well, start planning now! It’s actually hard to choose between types of photo booth. They’re all so great and unique! 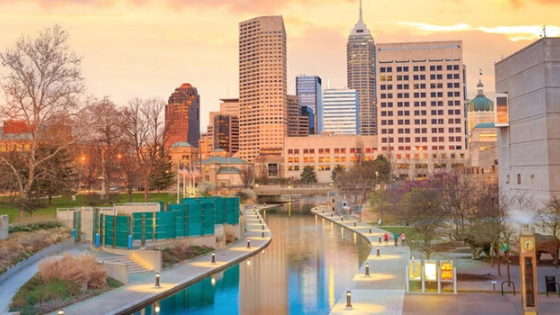 Taking a photograph is arguably the best way to capture a brief moment in time. No matter the occasion, people really love taking photos to help them remember the fun they had.

What better way to add entertainment at your event than a photo booth!

Unlike photos with smartphones or photographers, photo booths provide guests with experiences. It is more than just a photograph, your guests will enjoy themselves and even have a take-home souvenir of the fun they had.

How many of their smartphone pictures would they be likely to print? Probably none.

Having a photo booth means your event guests can take photos with friends and capture all of the fun they’re having at the event. Photo booths aren’t just about simple photographs though.

Modern versions of the photo booth are much better than smartphone captures. In fact, you’re often able to get physical copies of the photographs straight away in high-definition.

This will make your event really memorable for all that attend. Birthdays, weddings, baptisms, bar mitzvahs – whatever your Indianapolis event, a photo booth will give your guests a lasting memory of the phone they had.

The physical photo will also allow guests to relive your event time and again. What’s more, they’ll tell everyone all about it!

Everyone knows that photo opportunities are fun. They’re even more fun in a photo booth. With a photo booth, can have lots of different backdrops to make your event and your photos really personalized.

Another great thing about photo booths is that you can have props to make your photos really come alive. It’s great fun watching guests become like children again once they step inside a photo booth. There is hours worth of fun to be had!

Everyone loves a photo booth

Unlike other entertainment ideas, photo booths are great for everyone and everyone will love it. Whether old or young, all guests get to make great memories with a photo booth. Children love them and so do the older generation.

Forget party bags and party favors, photo booths provide both entertainment and take-home souvenirs for your guests. This is one type of party favor that guests won’t want to throw away once they get home.

In fact, the photos might adorn fridges and offices for many months and years to come! They’ll certainly be a talking point.

Photo booths are all the rage – Kim and Kanye West even had a photo booth at their wedding! However, social media is popular too! Did you know that you can combine the two?

There are loads of photo booths that are interactive and have connectivity to the internet. You can save your photos to your device, share them on your newsfeed, or send them to friends and family on What’s App or Snapchat! 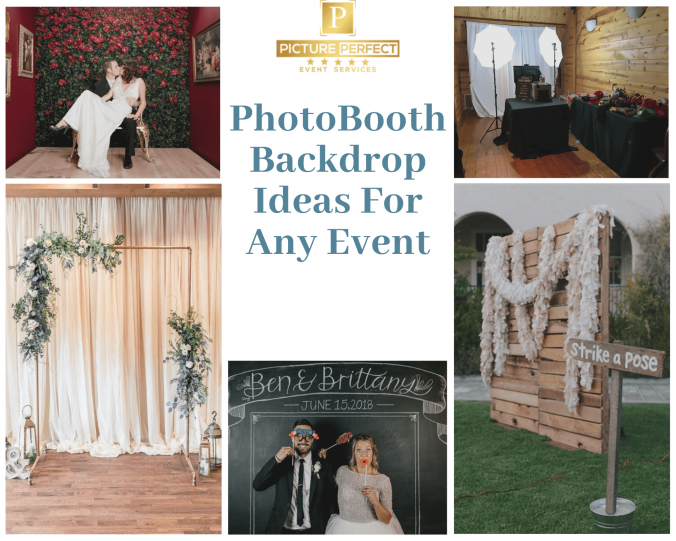 The backdrop of a photo booth shouldn’t be underestimated! This can really change how your photos look and the image that they create. Photo booths have come a long way from their original blue curtain or white screen backdrop of days gone by.

Realistically, the choices are endless, which often makes the decision really difficult! Let’s look at some possible backdrop ideas to get you thinking.

Plain backdrops are great for any event and make really great pictures. To add some glamour to an event, a plain gold or silver backdrop is a really sophisticated option.

To add even more pizazz, opt for a glitter curtain or image as your backdrop. These are ideal for weddings and other glamorous events where people are dressed to impress.

Depending on the event, it might be appropriate to have a vintage backdrop to tie into a theme. If the event is a birthday for someone born in the 60s, you might choose a backdrop that reflects this, for example.

If it’s a Christmas party or New Year celebration, reflect that in your backdrop. For a Christmas party, you could even incorporate appropriate props like Santa hats and fake gifts, for example.

Any business event is really about marketing. A photo booth can be a subtle marketing tool. Add your company logo or an interesting hashtag to the backdrop and the photos will be your latest marketing technique when employees upload them to their social media accounts.

If you really can’t decide what backdrop to go for, leave your options as open as possible with a green screen. This way, you can change the backdrop at the drop of a hat and can provide all sorts of photo opportunities at the click of a button.

What to Think Consider When Choosing a Backdrop

Your backdrop choice will depend on a number of different things. Before you make a final decision, consider the following:

If you really can’t decide, go for the green screen! That means you can chop and change however you fancy throughout the event. A green screen will be loved by all!

When a teenage girl becomes a young adult there is no better way to celebrate than a Sweet Sixteen Party. There is a whole host of parties for all styles and budget.

A Sweet 16 is usually a formal affair to help the girl celebrate her passing into another stage of her life. For many young girls, their Sweet Sixteen party is a milestone of great importance as it marks her transition from child to adult.

It is something that is second only to a wedding. Planning your daughter’s Sweet 16, therefore, is no mean feat – it is much more important than any other birthday party.

-2 months to 3 months before the party

Planning this event can take some time so around 2 or 3 months before, try to sort out your venue and organize the date!

The date of the Sweet Sixteen party doesn’t have to be on the actual birthday. It’s best to be after the birthday (so the girl is actually 16) rather than before.

Don’t forget to consider holidays and plan these in accordingly. It would be really sad to have an empty party because of key dates being overlooked.

It can be a difficult task to choose the right location. You will need to consider your guest numbers alongside your budget limitations.

Ideal places for such a party include a hotel facility, a ballroom or a party hall. However, if your budget is tight, you can always use a community center or park pavilion.

Who are your guests?

It depends on the girl. Some will want a huge, elaborate affair with a big crowd, others might want a smaller, more intimate party with just a few close family and friends.

Because the Sweet Sixteen is in a few months’ time, it would be a good idea to send a ‘save the date’ card or message so that the guests won’t plan anything for the day.

When you have everything booked (venue, date, and guest list), you can order your invitations. You could even make these yourself to add a personal touch.

The next step is to decide on a theme that will be unforgettable. Be sure to tease ideas out of the birthday girl herself!

If yours is a formal party, you can organize event caterers. If it is less formal, think about what you’re going to organize and arrange for other family members to help out in the run-up to the party. Don’t forget to order the cake!

Book the entertainment – your photo booth!

This is the best part of organizing a Sweet Sixteen Party. And… a party isn’t a party these days without a photo booth!

Everyone will love a photo booth! The laughs, the smiles, the screams of excitement – all of this will be captured in photo form! What’s more, a photo booth makes perfect party favors!

Your guests will love the experience and will keep their photo keepsakes for a long time! Photo booth rental is definitely the way to make a Detroit girl’s Sweet Sixteen come alive!